Last Friday saw hundreds gather at the historic ‘Actors Church’ St Leonard’s, Shoreditch for our Bastille Day Summer Social. While guests arrived and were ushered to their seats, members and friends were serenaded by the beautiful sounds of ukuleles, the players were students of the Duke of Uke’s School of Uke. At 7pm a magnificent fanfare resounded in the old church and announced the beginning of Guild business. Our founder Paul Gardner warmly welcomed everyone and spoke of the year passed since our successful crowdfunding campaign.

Many of our members spoke of the great work we have achieved together. The audience heard powerful and moving testimony from Nhi Chu who bravely told of her Father’s journey from Vietnam as a refugee and how, against all the odds he established Chu’s Garage in London Fields more than 30 years ago.

Our audience watched two short films about recent actions including the work of filmmaker Hazel Sheffield documenting the effects of the steep rises in rents that tenants have been facing. Len Maloney of JC Motors, EETG member and representative spoke of the meetings we have undertaken where we decided to come face to face with the decision makers at both Transport for London and Network Rail. Len read out a statement from Graeme Craig, Commercial Development Director promising to do better in TfL’s relations with tenants and agreeing to regular meetings between TfL and our members to avoid problems in future.

Local artist Adam Dant, proclaimed ideas about our new map which he is creating with Herb Lester. A work in progress is still on display inside the church where readers are encouraged to visit to add their thoughts to what should be included on our second edition.

Mayors John Biggs and Philip Glanville also spoke of the importance of small businesses and the self employed in East London. Mayor Biggs announced progress on our work since our meeting with him, and confirmed that Tower Hamlets Council are going to fund research with EETG partners the New Economics Foundation to define guidelines and principles for affordable small business rents. An important piece of work which can be applied to progressive landlords, used within local plans and perhaps even the London plan. Mayor Biggs also stated that the council would part fund our new map of members.

Hackney Mayor, Philip Glanville disclosed that 550 businesses in Hackney would be eligible for the new business rates fund that was announced in the Budget earlier this year. We will be following up with both councils for greater clarity on business rates changes and will update our members as soon as we can.

To join our Guild in time to feature on the latest map, fill in this short form by the 31st July! This is the final deadline and cannot accept any further inclusions onto our map beyond this date.

Vast thanks to all members and friends who played a role in making our social on Friday such a wonderful occasion. Special thanks to The Five Points Brewing Company, The Duke of Uke, The Deli Downstairs, Jeremy Freedman, Marcus Duran, Sigrid Gelati-Meinert from Peponita Shoes, James Brown, Robert Gardner, Alice Backham at Splice Post, Hazel Sheffield at Far Nearer, What The Dickens! Vinarius on The Roman, Square Root London, and Robin Hatton-Gore from St Leonard’s Church. 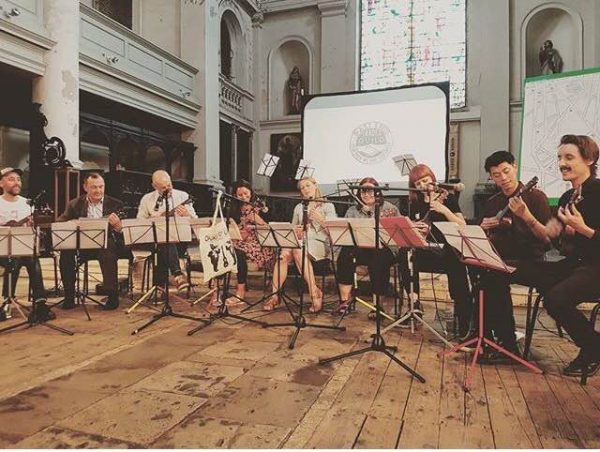