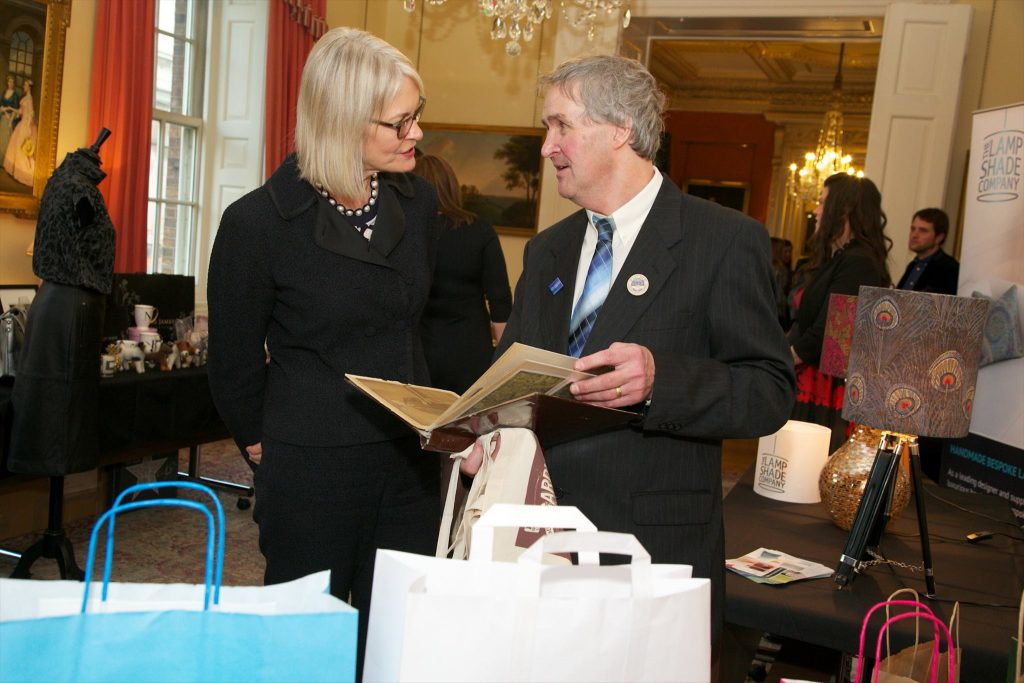 December 2016: Margot James MP, Minister for Small Business, congratulates Paul Gardner, owner of Gardners’ Bags and and founder of the East End Trades Guild, on being named one of Britain’s Top 100 Small Businesses (above).

Last summer: Prime Minister Theresa May said: “From dynamic start-ups to established family firms, our small and medium sized businesses are the backbone of our country. I want to build an economy that works for all, and that means working with, and listening to, smaller firms.”

Now: thousands of these small and medium firms across London face an uncertain future under the Government’s plans to hike their business rates, in many cases by more than double.

The Capital’s thriving and enterprising business communities are at risk of sliding into stagnation; employment replaced by unemployment, and vibrant clusters and high streets replaced with empty shops and closed shutters.

We are calling on Government to work with and listen to London’s businesses and halt implementing the new valuations until they have committed to:

●      Devolve the operation and setting of London’s business rates to London’s government so they better suit the challenges of the Capital.

Paul Gardner was invited to the 10 Downing Street reception in recognition of the 147 years his family business has been serving customers in the East End. He listened proudly to the Minister speak about how important small businesses like his are to the UK economy.

He said: “I was very honoured that I was invited. It was a defining moment in my life, going to 10 Downing Street. I think my mum will be very proud of me”.

Paul is one of the thousands of independent businesses who are facing a huge rise in Business Rates from April. This is because the Government has revalued rates based on property prices, and prices have more than doubled in parts of London. Many businesses now face closure by virtue of their post code. Making it worse is that many businesses previously classed as ‘small’ will become ‘medium’, meaning they will not be eligible for small business rates relief.

The rateable value of Paul’s business is rising from £18,000 to £40,500. He said: “It means not much of a future for my business. Most people who run a small business are just keeping their heads above water, but if they have another £300 a week to find that will be the end.”

Hackney has the highest rateable value increase in London, with an average rise of 46%. Hundreds of businesses now face a bill tens of thousands of pounds more than they paid last year. For many there will be a similar increase next year, and for some the year after that.

Stationery manufacturers Baddeley Brothers, which opened in the borough 157 years ago, has seen its rateable value rise from £60,000 to £156,000. It has a proud tradition of hiring and training local residents, and currently employs 25 people. Director Charles Pertwee said: “With this sort of increase, we’re talking peoples’ jobs. As a family business in its sixth generation this is not something we wish to consider. It will make us consider whether Hackney is a viable location to continue a light manufacturing businesses.”

Len Maloney, Hackney born and bred, runs JC Motors in Haggerston. The business works with a local charity to provide job opportunities and mentoring for young people. Now Len’s got to find the extra £10,000 added to his rates bill. He said: “This has gone way, way over the top. I am so stressed because I see no hope for the business. Ministers should come down to ground level to see what businesses like ours do for our local communities.”

Please join us in taking a stand against the Government to protect independent businesses like Paul’s, Charles’ and Len’s – ‘the backbone’ of London’s economy – by signing our petition.